I know I said it started on eBay, or on my 40th birthday, but of course it didn’t, not really. My current obsession with retro gaming is like episodes IV-VI, but with better prequels.

My Phantom Menace, to stretch an already crap metaphor, occurred when these two 80s behemoths met in a friends brother’s bedroom some time in 1983 or 84… 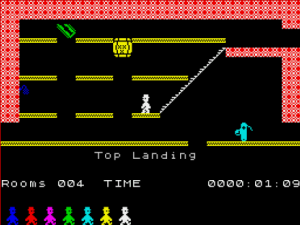 The Ubiquitous Willy himself 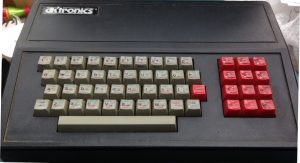 On the left is, of course, the definitive Spectrum gaming experience, Jet Set Willy. On the right, and possibly less easily recognised, is a ZX Spectrum which has been transplanted into the chunky and space-bar-having DK’Tronics case.

The picture is actually one I acquired myself last year because I’m a collectaholic; I can’t remember what I thought of the keyboard back in the early 80s, but now, although it is an interesting piece of Spectrum history, it’s just too big and clunky in comparison with the sleek and rubbery original.

But that’s by the by; I mention it here because it was on the DK’s chunky plastic keys, and not the dead flesh Sir Clive bestowed upon his creation, that I first played Jet Set Willy. Also Pyramid, I believe, but it was Willy who left an impression on me.

I can’t say for certain that it was my first Sinclair experience; it may have been, but the mists of time have hidden that specific fact. It was a game that everybody knew, everybody talked about, even that slightly weird kid with a Vic-20. Rumours of hidden rooms, cheats, and even a sequel, were part of the background noise of my formative years.

There were also rumours that the game was impossible to complete; not just in the sense of being too bloody hard even with the generous helping of extra lives you were given, but actually not possible to complete. This one, I later found out, was true – but irrelevant, because my gaming skills have never been good enough to bother the ending screen of a game like Willy.

When I eventually did get a Spectrum, I absolutely did not acquire a bootleg copy and duplicate the copy protection in my maths book over a weeks worth of break times. What I did do, however (and probably in a page from my maths book) was explore that ridiculous over-sized mansion and create a map of my exploits. Knowing I could never actually win the game, the greater challenge for me was to discover new rooms, to expand my map ever so slightly.

Later, of course, Matthew Smith’s original game was expanded upon – there was, after all, a Jet Set Willy II – and my maths book was no longer big enough to record my exploits. By the time I got a copy of JSWII, I undertood the term ‘Pythonesque’, and how it related to certain aspects of the game.

I also discovered the prequel*, in which the wealthy man about town Willy was just a humble Miner, still destined to live out his daily life in a frustratingly pixel-perfect way, but this time strictly one room at a time and with a limited air supply.

All three of these games were brilliant – Matthew Smith made excellent use of the Spectrum’s colour palette, and provided in game music which was ahead of its time really. The scope of the Jet Set Willy games was almost a precursor to free-roaming games of more recent generations – a primitive Grand Theft Auto, if you like, but without the theft. Or the autos.

They were fun, funny, stupidly hard but not so frustrating you wanted to feed the tape to a mutant toilet. At least not every time. JSWII didn’t really add anything new except several new wings on the mansion and a Star Trek inspired section (which was quite a nice surprise when I first reached it).

There was also lots of fun to be had with Jet Set Willy editors, and as a result dozens of JSW games available that I haven’t even looked at… I could have a review blog dedicated to those alone!

In fact, one day I might tweak the games myself, try and create a version that plays like Bootlesquith Manor in The Ballad of Matthew Smith – sort of the game of the book of the game – watch this space!

*Yes I know. I just discovered it later.